A mobile live arts event, Festival in a Van has been bringing live performance to towns, villages and doorsteps around the country since 2020. Throughout 2022, the van has been touring Ireland with the Shared Music Sessions – introducing musicians from Ireland, Ukraine and other new communities, through music and song. Here, Director of Festival in a Van – Gemma Tipton – gives us insight into the project and how it has been an unprecedented force for good.

It is late spring, and a small girl brings a bunch of wild flowers up the steps to the Festival in a Van stage. She is wearing a coat that’s too big for her, it has probably been donated locally. She hands the flowers to the band. That was the first Shared Music Sessions gig. We were in the car park of a hotel in Co. Kerry: just one of those that were being hastily readied to host the refugees coming from Ukraine, a country in the first throes of a war no one could quite believe.

Over nine months, and almost 50 sessions in 20 counties later, we have played host to over 100 musicians from Ireland, Ukraine, Nigeria, Senegal, Latvia and more. It has been “heart-warming and heart-breaking in equal measure,” as one of the musicians put it. Festival in a Van was born in Covid, as a way to keep live performance going, safely. Since then, we have realised that our Van can bring the arts to unexpected places. It can also go to those places that suddenly come to need the arts most.

The idea behind the Shared Music Sessions was, and still is, to let the music do the talking, and so we build on the spirit of the traditional Irish seisiún. At each event, there are Irish artists, and artists from the refugee community. We programme enough to leave space for more to join in as things get under way. We make sure everyone gets paid. The opportunity to earn money from your art when you are far from home, should never be underestimated. Neither should the power of music. Music communicates when language barriers get in the way; and music comes into its own when words are not enough. From Kerry to Cavan, Louth to Limerick, and all points in between, our Van has been able to pull up to hotels and guest houses, park in town squares, and open its doors at community centres and parish halls.

During the tour, Irish artists gave impromptu Irish dancing lessons, and Ukrainian artists repaid in kind. A group of older women in Co. Clare presented one of our bands with hand-knitted socks in thanks, and the audiences held up their phones as the music played, to show family and friends back home that they were well, safe and, just as importantly, welcome. Other gifts have included children’s drawings of the bands on stage, presented after the dancing is done. Our Festival in a Van crew come home with stories of kindnesses, joy and deep sadness too.

There has been poetry, trad, opera, folk, rap and rock. A chamber trio from Kyiv played, in black tie and ball gown, in the car park of a hotel in Co. Louth. Back home, they had been honoured for their services to music, and they showed pictures of President Zelensky presenting them with their medals. In Wexford, we had a magician for the children, while at another stop, the local school gave the class the morning off so their Irish-Ukrainian dance troupe could perform.

In each location, we have programmed a combination of local, and visiting artists, so that people get a chance to meet. Local Authorities introduce their networks, while Music Generation add their voices, and often their instruments. There are many, many local heroes, doing extraordinary work. We have discovered that small moments can create wider connections. A singer from the refugee community was invited to join a local sean nós group. Maryna Odolska, who has become a regular Sessions Artist, added Song For Ireland to her repertoire. I can still hear her sing the lines made famous by Mary Black: “Dreaming in the night, I saw a land where no man had to fight,” on a bright autumn day in Cork. And it still chokes me up. 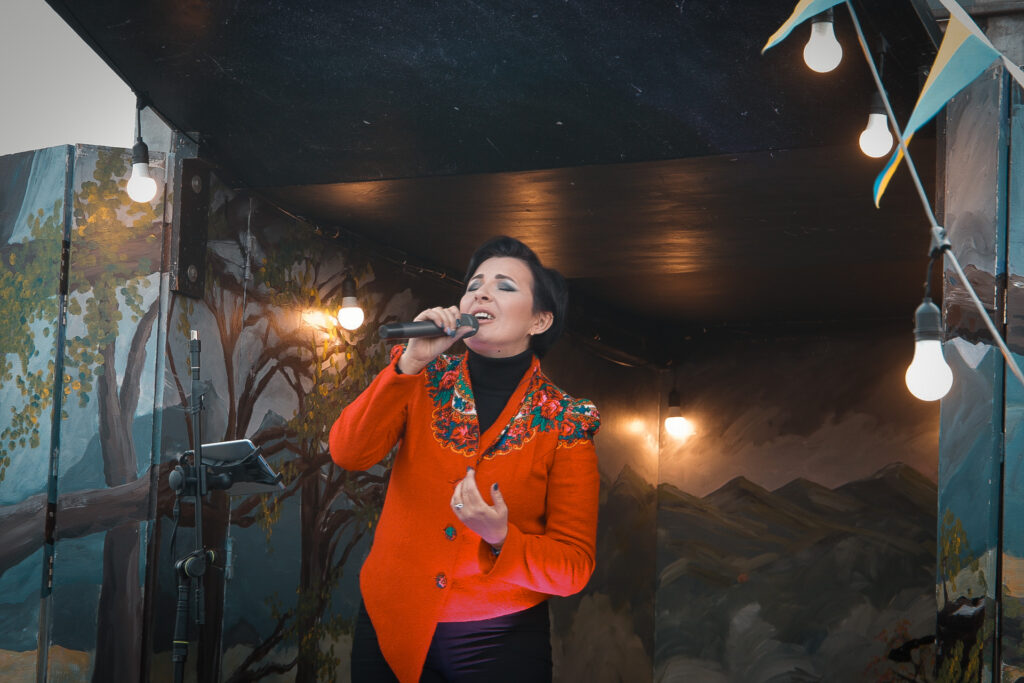 Over time, we have extended the sessions, adding more voices to meet all audiences. How much do arts and culture mean in the face of war? How much can songs help when people are forced far away from home and family? The answer is: immeasurably. Music and songs carry culture, feeling and memory across time and place. They bring people together. Voices can be raised in defiance, or shared in sympathy and community. There is celebration, and quieter moments of reflection.

Equally, inviting people to sing and play together gives everyone a chance to contribute in an equal way. We learn from one another, we understand each other better. “Thank you for making me feel needed in Ireland,” wrote one artist after the event. “You Irish are the best,” calls another from the stage to loud applause. I wonder if we are. I’d like to think that if we ever faced such a need ourselves, we would find people in another country to welcome us, make us safe, and invite us to sing with them too.

The Festival in a Van Shared Music Sessions are supported by Creative Ireland, and have run throughout 2022.

Find out more at festivalinavan.com