Le Cheile “a game changer” for young musicians with disabilities.

Until recently orchestra used to be the preserve of the musical elite but Le Chéile changes all that.

With support from Creative Ireland’s National Creativity Fund , the Royal Irish Academy of Music has developed  The Open Youth Orchestra of Ireland. This unique ensemble is the first of its kind in the country and is made up exclusively of musicians with disabilities including Down syndrome, autism and cerebral palsy.

This cross-border orchestra draws members from the four provinces and performed for the first time in Athlone in September. Using a technique devised by Dr Denise White of Ulster University called “conductology” which will rely on the use of 18 gestures agreed upon by all the musicians.

RIAM director Deborah Kelleher described it is a “fascinating time” in the development of music for people with disabilities.

“I can’t get over what a game-changer this is. The opportunity to extend new invitations to teach people with different abilities would have been barred to us before, but there is no stopping us now. I can’t wait to see what the next generation of musicians are going to look like. They are not going to look like they were in the past.” 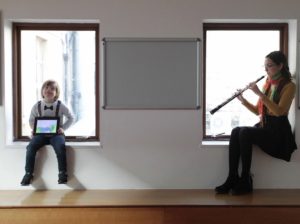 The orchestra is made up of musicians playing conventional instruments and others using new technology such as tablets, iPads and mobile phones which are better suited for some of the young musicians. Le Chéile is only open to those between the ages of 16 and 30.

Le Chéile has secured funding from the Social Innovation Fund of Ireland for 2020 which will see the expansion of the project, as well the development of new hardware/software through virtual reality. The official home of the Open Youth Orchestra of Ireland has been secured through the generous sponsorship by Avolon, which will be located in the re-developed campus of RIAM, to be launched in 2021.